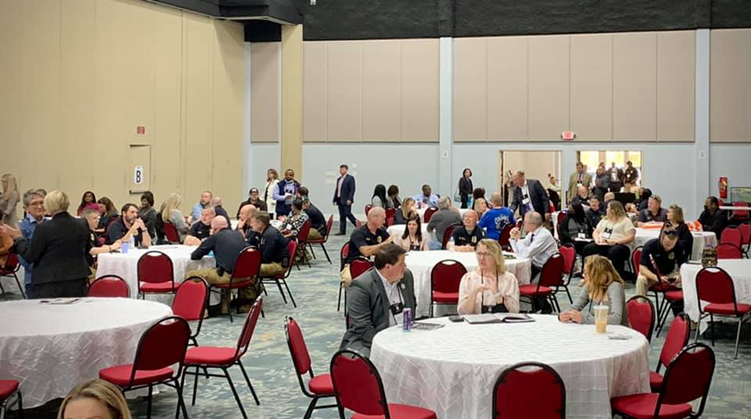 Officers and employees of the Alabama Bureau of Pardons and Paroles and the Alabama Department of Corrections united for the 2021 Alabama Council on Crime and Delinquency Fall Conference. The conference took place Sunday through Wednesday in Orange Beach, Ala., consisting of events to unify law enforcement officers and employees in Alabama state agencies. The conference was an opportunity for learning and collaboration for Alabama’s agencies and organizations serving justice-involved individuals.

Throughout the event, officers were visibly enthusiastic while learning about their counterparts’ roles, both inside and outside their home agencies. Bureau Director Cam Ward said, “I am proud to see so much enthusiasm from the officers and staff of the Bureau and the Alabama Department of Corrections as they united and got to know each other better in our combined efforts to reduce recidivism.”

The event welcomed many special guests, including Gov. Kay Ivey and Lt. Gov. Will Ainsworth. Both spoke on the optimism they feel as the Bureau and ADOC continue to work together more closely in support of mutual goals.

ACCD President and Bureau District Manager Kristi Smith said, “It was an honor to have great leadership come out to speak with and train our officers. I appreciate the support of the businesses and communities across the state that have helped with the conference. ACCD has been around for 72 years providing training and a network base for the criminal justice field across the state, and I’m happy to see the growth and support of the organization.”

A highlight of the conference was attendees welcoming bestselling author Damon West, who spoke about his changed life after spending seven years in a Texas maximum-security prison. His message encouraged many after the presentation, with employees telling each other to “be a coffee bean,” a reference to West’s often repeated mantra.

After the conference, West said, “Every person needs to know their jobs matter. This presentation was special to me, as a parolee, to tell the Alabama Bureau of Pardons and Paroles and Alabama Department of Corrections that they are the face of hope for so many men and women.” To learn more about Damon West, visit: https://damonwest.org/.

The Bureau expresses their gratitude to the following for making this event a success: Gov. Kay Ivey and Lt. Gov. Will Ainsworth, ADOC Commissioner Jefferson Dunn, the vendors who provided resources for this event and services to our offices, and each of the event presenters. We also gratefully acknowledge Alabama Council on Crime and Delinquency President Kristi Smith, along with all the members who serve on the ACCD Board and various committees, whose efforts made this event a success. For more on the ACCD, visit: https://www.accdonline.org/.